After 3 days of riding we have made it into country #2; France. Here’s an update on the tour so far.

A late start from Combe Down after final preparations lasted till 6am, we eventually rolled out just after 11am, my mum came to see us leave and made porridge to set us up well for the day. 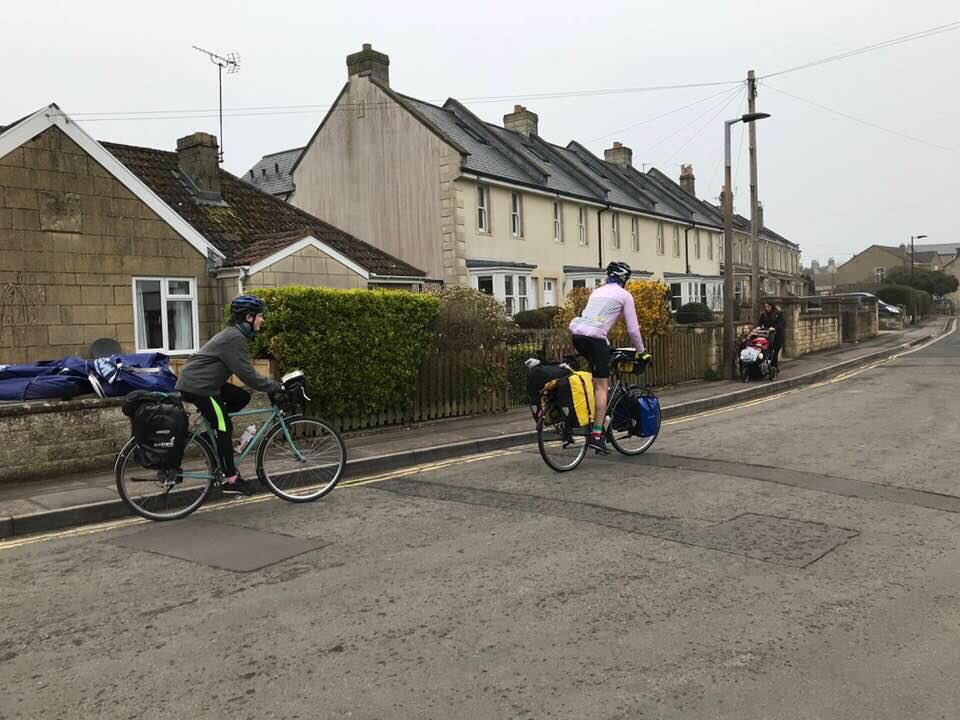 Then we were off for real, flying down Summer Lane before facing the steep back roads through Limpley Stoke and on to the national cycle network. While these roads were almost empty of cars you could see why, they were muddy, potholed and in one place completely flooded. 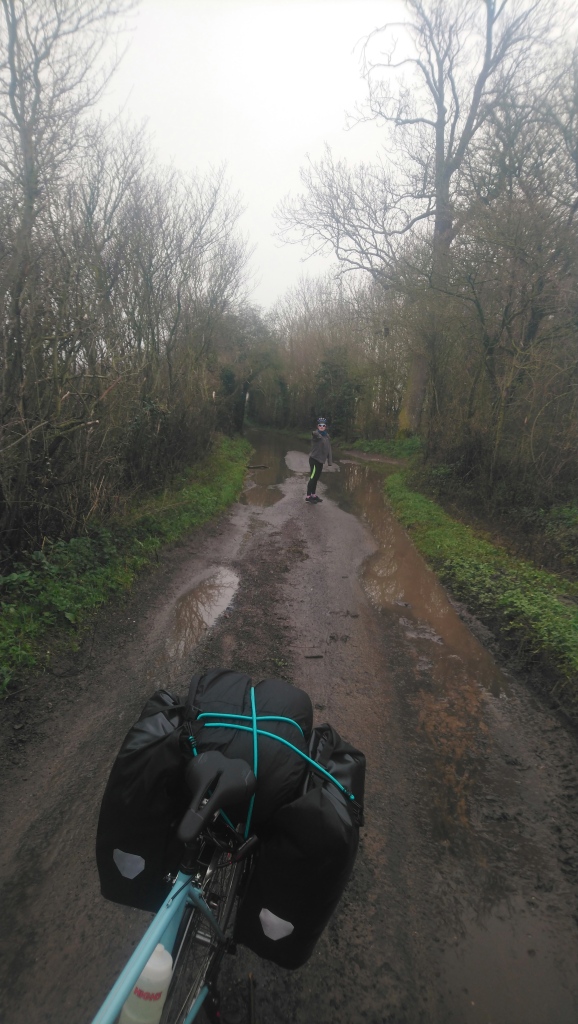 More mud and more potholes followed before we met my Dad in Upton Scudamore for lunch. A pit stop of a beer and pasta helped us refuel and we set off again. After Warminster we continued down the Wylye Valley and asked a friendly looking farmer if we could sleep in his field. This led to a wild goose chase where each person we asked saying they were sure they knew of someone in the next village who would be able to help. Eventually we went to the tried and tested method of ducking off the road and found this spot. 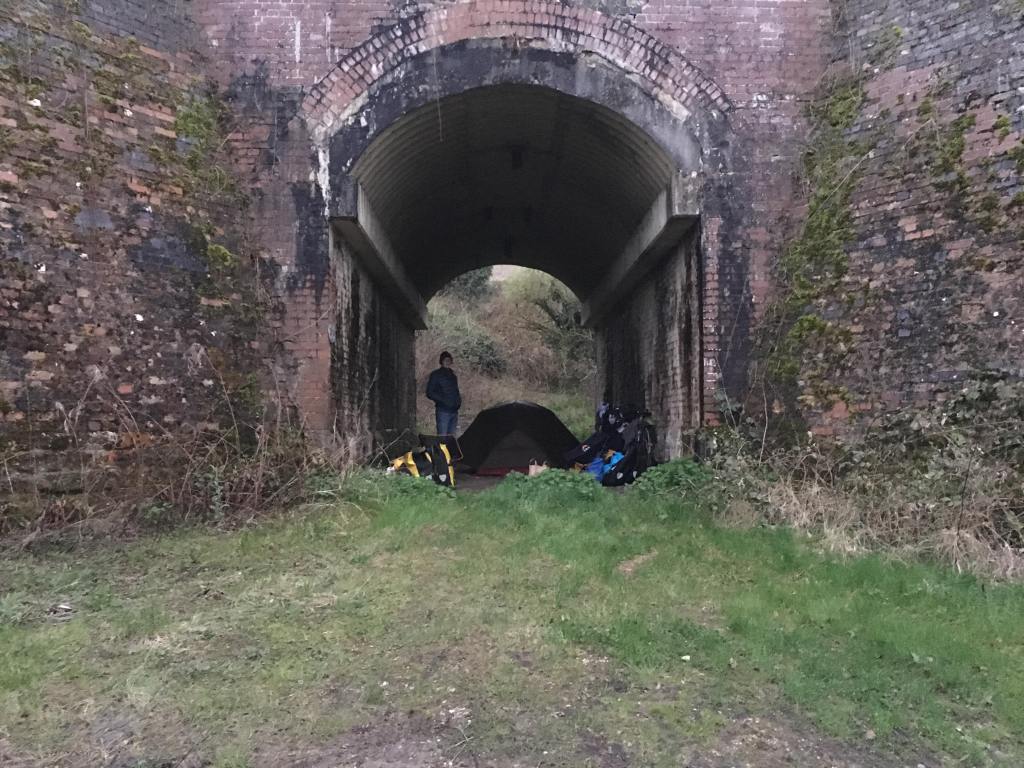 Tent up, we enjoyed some left overs from the pub lunch and settled down for the night.

With 30 miles to cycle we allowed ourselves a late start. Once underway the roads were a big improvement to day 1 – gently rolling, less mud and an intact surface.

We stopped for lunch in Salisbury and Lauren enjoyed a bratwurst – probably the first of many as we head to Germany.

The cycle path out of Salisbury was pretty frustrating with the route disappearing at will and once found criss crossing the busiest road in the area, this is sadly pretty standard for UK cities from my experience.

Out on the open road again we were making steady progress until Lauren spotted a helpless bird in the middle of the road, despite being knackered she sprung off her bike and picked up the stunned animal which promptly vomited onto her glove.

After knocking on a few doors to see if anyone could assist she set it down and as I tried to feed it a cereal bar it recovered and flew away.

On through the Hampshire lanes we went, trying to find a way to my brother’s without spending too long on the A36. This led to a roundabout route and another animal encounter; a friendly dog got a bit over excited and marked it’s territory on Lauren’s front wheel. Clever dog as it’s territory now includes parts of northern France.

Tom, my younger brother lives in a converted ex-army Bedford truck on a farm just outside Romsey. Once we arrived he helped with a few bike repairs and cooked us food, whilst we showered and washed our cycling kit; just what we needed!

We started the day with a fry up, cooked by Tom, luxury touring indeed!

After that we went to meet Tom’s landlords; Rob and Polly (longwayhome.travellerspoint.com) who cycled to the UK from South Africa in 2010 and had lots of useful advice to pass on as well as a well travelled travel sink and water bag.

Our final destination was a ferry 30 miles away in Portsmouth. We set off around 1pm, with plenty of time to make the 11:30pm crossing.

We were entering a more populated area so navigating became harder, especially when trying to avoid busy roads, but the combined efforts of my maps, garmin and phone finally managed to help us find a bike path!

The sun was out, making it a pleasant final ride in the UK and once we had only a few km to go we stopped for a well deserved pub meal.

The final kilometres were on a bike path (actually a bus lane) that was fit for purpose, from Fareham to Gosport. From there we took a 4 minute ferry to Portsmouth followed by a 2 km ride to the international ferry port and we were home and dry, just having to wait to board our ship. 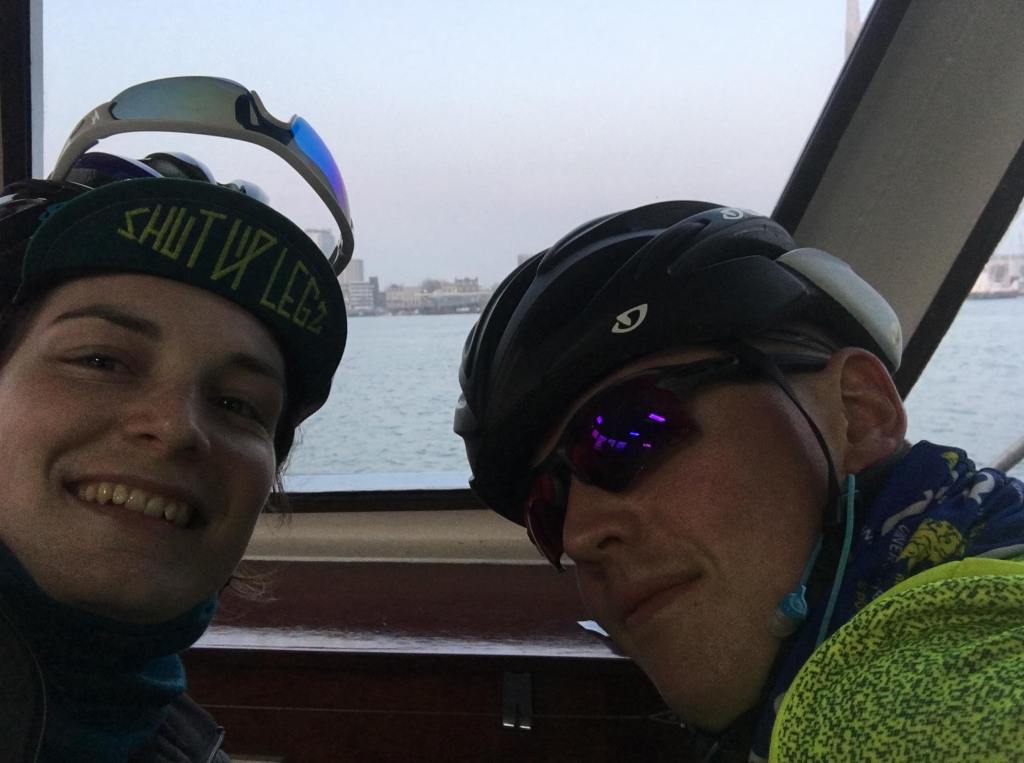 It was a short and sweet stint in the UK, good weather and short rides to ease into life on a bike. Next stop Le Havre!

View all posts by hduck1